This list is an ever-changing compilation of items that I wish to accomplish over my holiday break. Please note, these items are not in a particular order in which I wish to complete them, and some items may be subject to change based on financial reasoning and practicality. This list can only be added to and never subtracted from. What is not accomplished over Thanksgiving Break will carryover into Christmas Break, and documentation of my bucket list accomplishments will take place right here! 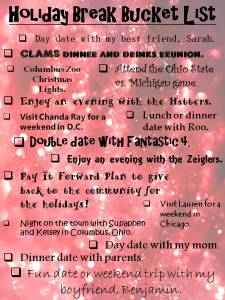 4) Attend the OSU vs. Michigan Game.

5) Enjoy an evening with the Hatters.

6) Enjoy an evening with the Zeiglers.

7) Lunch or dinner date with Roo.

8) Visit Chanda Ray for a weekend in D.C.

10) Pay It Forward plan. (See next post for more details.)

11) Night on the town with Papa and KJ in Columbus, Ohio.

14) Visit Lauren for a weekend in Chicago.

15) Fun date or weekend trip with my love.

This is worth sharing: 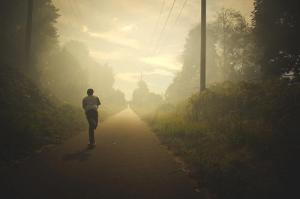 I came across this post today on Facebook and really wanted to pass it along. It doesn’t matter if you’re in your 20s or not, each point is an important reminder and inspirational thought. Enjoy!

1. Stop placing all the blame on other people for how they interact with you. To an extent, people treat you the way you want to be treated. A lot of social behavior is cause and effect. Take responsibility for (accept) the fact that you are the only constant variable in your equation.

2. Stop being lazy by being constantly “busy.” It’s easy to be busy. It justifies never having enough time to clean, cook for yourself, go out with friends, meet new people. Realize that every time you give in to your ‘busyness,’ it’s you who’s making the decision, not the demands of your job.

3. Stop seeking out distractions. You will always be able to find them.

4.Stop trying to get away with work that’s “good enough.” People notice when “good enough” is how you approach your job. Usually these people will be the same who have the power to promote you, offer you a health insurance plan, and give you more money. They will take your approach into consideration when thinking about you for a raise.

6. Stop identifying yourself as a cliche and start treating yourself as an individual. Constantly checking your life against a prewritten narrative or story of how things “should” be is a bought-into way of life. It’s sort of like renting your identity. It isn’t you. You are more nuanced than the narrative you try to fit yourself into, more complex than the story that “should” be happening.

9. Stop treating errands as burdens. Instead, use them as time to focus on doing one thing, and doing it right. Errands and chores are essentially rote tasks that allow you time to think. They function to get you away from your phone, the internet, and other distractions. Focus and attention span are difficult things to maintain when you’re focused and attentive on X amount of things at any given moment.

10. Stop blaming yourself for being human. You’re fine. Having a little anxiety is fine. Being scared is fine. Your secrets are fine. You’re well-meaning. You’re intelligent. You’re blowing it out of proportion. You’re fine.

11. Stop ignoring the fact that other people have unique perspectives and positions. Start approaching people more thoughtfully. People will appreciate you for deliberately trying to conceive their own perspective and position in the world. It not only creates a basis for empathy and respect, it also primes people to be more open and generous with you.

12. Stop seeking approval so hard. Approach people with the belief that you’re a good person. It’s normal to want the people around you to like you. But it becomes a self-imposed burden when almost all your behavior toward certain people is designed to constantly reassure you of their approval.

13. Stop considering the same things you’ve always done as the only options there are. It’s unlikely that one of the things you’ll regret when you’re older is not having consumed enough beer in your 20s, or not having bought enough $5 lattes, or not having gone out to brunch enough times, or not having spent enough time on the internet. Fear of missing out is a real, toxic thing. You’ve figured out drinking and going out. You’ve experimented enough. You’ve gotten your fill of internet memes. Figure something else out.

15. Stop approaching adverse situations with anger and frustration. You will always deal with people who want things that seem counter to your interests. There will always be people who threaten to prevent you from getting what you want by trying to get what they want. This is naturally frustrating. Realize that the person you’re dealing with is in the same position as you — by seeking out your own interests, you threaten to thwart theirs. It isn’t personal — you’re both just focused on getting different things that happen to seem mutually exclusive. Approach situations like these with reason. Be calm. Don’t start off mad, it’ll only make things more tense.

16. Stop meeting anger with anger. People will make you mad. Your reaction to this might be to try and make them mad. This is something of a first-order reaction. That is, it isn’t very thoughtful — it may be the first thing you’re inclined to do. Try to suppress this reaction. Be thoughtful. Imagine your response said aloud before you say it. If you don’t have to respond immediately, don’t.

17. Stop agreeing to do things that you know you’ll never actually do. It doesn’t help anyone. To a certain extent, it’s a social norm to be granted a ‘free pass’ when you don’t do something for someone that you said you were going to do. People notice when you don’t follow through, though, especially if it’s above 50% of the time.

18. Stop ‘buying’ things you know you’ll throw away. Invest in friendships that aren’t parasitic. Spend your time on things that aren’t distractions. Put your stock in fleeting opportunity. Focus on the important.

This is worth sharing: